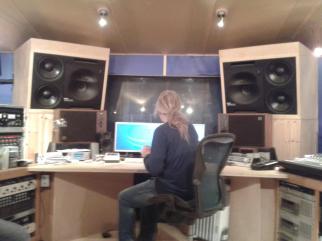 Well, how was it for you? It was pretty good from where I have been standing in various venues up and down the country (including Bristol  -twice, and Leicester) and of course on record – CD as opposed to coloured vinyl. As the prog year draws to a close, I can only stare in awe at the great leaps and bounds again made in creating new music, the sounds that theoretically can’t be made. But thanks to the wonders of modern recording studio technology, file-sharing and production techniques, they can.

Again, as we stand on the cusp of another new year, as a fan, I can only marvel at highlights from  the soundtrack that has defined 2012. Some might still argue that 2011 was when it hit its most recent highest peak but there is no disputing that some extremely fine albums have been made and by the “old” school in particular.

Wearing my heart on my prog sleeve is not hard to do when there has been so much released that went so much further than presenting itself simply as an enjoyable hour’s listen on the car CD or a once heard then back in the box offering.

My yardstick goes a great deal further now and has led me to review my policy of listening to music for the first time in the car as my top three albums of the year all testify in their own right! Okay, I remember my “first” time for all three, funnily enough. Map of the Past I first listened to when I was on my way to a funeral but as I arrived at the church with a smile on my face, it was job done.

Getting through Clockwork Angels took a couple of attempts as my car journeys were not long enough and I kept missing the final masterpiece, The Garden, which was the one I was advised to pull into a lay-by and listen to. In the end, it proved to be an excellent tip.

Where do I start with English Electric Pt 1? Presented in person by the producer,  I somehow got lost in my very own neighbourhood then started sobbing , which in themselves, are pretty good indicators that parts not normally permeated were indeed being reached.

I guess that begs the question of how each of us listens to music? I suppose the answer is all differently as I could never hear it with either the ear of a musician nor a studio techie.  I do not listen to which instrument is doing what or try to work out which make of instrument was used in the execution.

No, I have always heard music pieces as an inner journey and that stems back to when I first was exposed to Pink Floyd’s Echoes when I was 13. Around that time, I was grappling with a few early spiritual concepts such as astral projection so all of my efforts went into composing a very long prose poem based on that particular classic, involving a stricken submarine and a captain who decided the only way out was to try a bit of the old astral travelling to see if he could touch base with a higher being or two to find a way of of the craft and crew’s predicament. It all sounds a bit far-fetched now and I so wish I had kept the original, all scrawled in pencil at the time.

So I suppose this is where Yes scored so highly early on because Close to the Edge was the ultimate prog journey prompted of course by Roger Dean’s evocative artwork. Earlier still, I was carried along the River Thames by Curved Air’s Piece of Mind, based on T S Eliot’s The Wasteland.

So fast forwarding to this year, all three of these albums did come complete with their own built-in journeys, MOTP starting with the man in the photograph then carrying forward his spirit through war, peace-time, love and death.

CA was a journey through a parallel world populated by strange mechanical devices, control freaks, anarchists, shipwreck plunderers, treasure seekers and circus hands – all of them symbolising many of the trials and tribulations of life.

And EE Pt 1 was above all a journey through both the built and natural landscapes of England – and also into the world of art forgery and ultimately, hell itself.

So soon it will be time to ring out the old and ring in the new, and already, some interesting journeys are appearing on the immediate prog horizon. One will be into space courtesy of Robin Armstrong whose Cosmograf project will be giving us The Man Left In Space, an allegorical look at success and achievement while the John Young/Nick Beggs/Frosty Beadle triumvirate are taking us on a journey through human existence itself with Lifesigns.

Then beyond them will appear the eagerly awaited Le Sacre du Travail from the newly reconfigured The Tangent featuring Gavin Harrison of Porcupine Tree and David Longdon of Big Big Train…. talking of whom will be releasing English Electric Pt 2 in early March. How they can possibly better Pt 1 remains to be seen and eagerly heard.

Also, coming is Also Eden’s follow-up to Think of the Children, [REDACTED], which represents a shift in direction for them while the future sound of prog, Maschine, have been hard at work on their debut album. And there is a new one coming from Magenta – always cause for celebration, plus Pallas (how can they better XXV), Pendragon and Frost*. And of course, Steven Wilson’s new solo album, The Raven that Refused to Sing (and other stories) will also be with us shortly. I am getting the box of tissues ready!

So, let the new prog journeys begin and see where they all take us this time.  These links are a good a place as any to start: